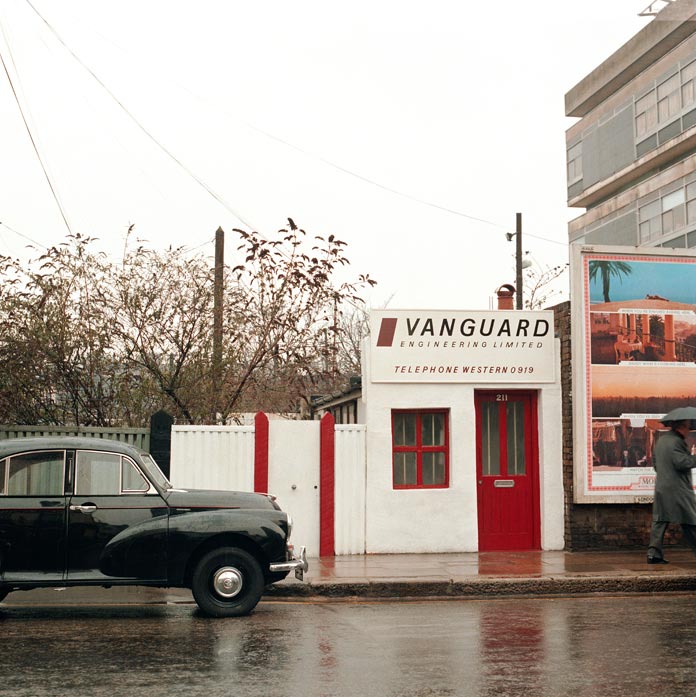 This is 211 Warwick Road W14 which was Vanguard’s very first office. It was an ex-BR weighbridge hut which Vanguard rented from the Western Region of British Railways for £150 per annum.

On a hot Sunday, 3rd August 1964, the day before Vanguard started trading, Eddie McCormack, Ian Sandeberg and Mac McCullagh, together with Diane Brooks and Carole Maxey (their secretaries at Beck & Pollitzer where they had all previously worked) painted the whole of the 18ft x 8ft wide building inside and out and by mid-day were enjoying a well-earned al-fresco pint immediately across the road outside the Warwick Arms.

They watched a very drunken individual weave his way up the pavement on the opposite side of the busy road and all became concerned when he stopped outside this door, the door of their pristine little office, undid his flies and it dawned on the team what he was about to do. They all became incandescent when they saw him flip open and pee through the letter box but there was nothing they could do – the fast flowing traffic precluded immediate intervention. He had time to empty what he had to do and seconds later had his ears filled with every accusation and threat under the sun. He was as Irish as they come and apologised profusely, explaining: ‘Bajeezus, I didn’t know the wee building was occupied. I have been using that as a relief point after I leave the Pembroke Arms and before I reach the Radnor Arms and I promise never to do that again’.