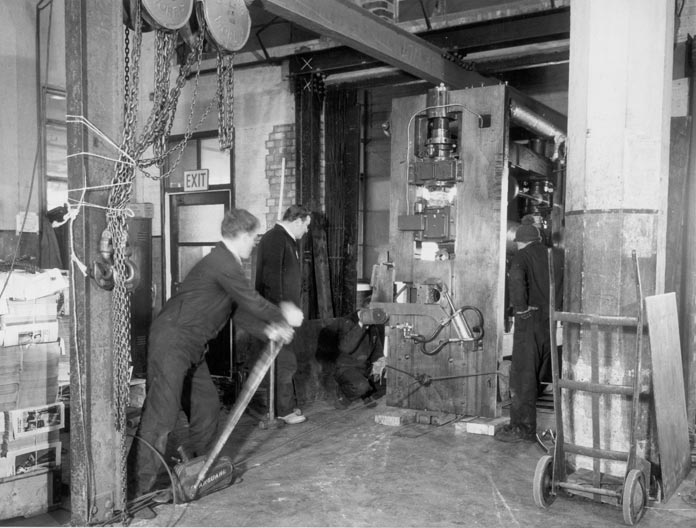 In 1965, we were asked to attend a meeting By Mr Charles Brinsden, Technical Director of Sun Printers together with his technical team Bert Creighton, Ray Alberto and Bill Randall at which we were advised that they were about to start a huge, modernisation programme, the start of which was the installation of the latest Rotogravure Press from Miehle Goss Dexter, Preston which would be used to print the Sunday Times weekend Magazine. We duly submitted our quotation for the transportation and installation of the MGD Press which consisted of 13 Units and 2 Folders the entire press weighing 295tons.

Each of the Units were top heavy, with the result that the movement of each was fraught with danger, a small degree from vertical could spell disaster not only to human, but also the machine itself. Cometh the day and cometh the hour—- the first Unit arrived on the loading bank, the team – Eddie, Mac, Johnny Burns and Jim Jarman – were ready, the steel plates were laid and the Unit on the machinery skates and all safety packing in position, it was game on!! The first doorway was extremely tight, as the first Unit went under the door it jammed solid – no way could the doorway height be increased – the adrenelin flowed, Mac climbed to the top of the Unit to discover that the problem was a ½” high grease nipple which had not been shown on any drawings, once this was removed from the Unit and all subsequent Units, the project went smoothly.

That offending grease nipple has remained in Mac’s drawer for 49 years as a constant reminder of when Vanguard almost did not pass the first post!!!