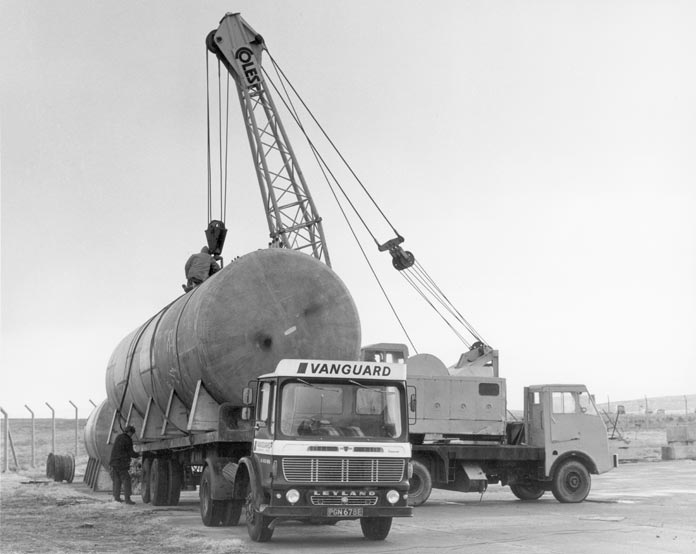 Sir Donald Stokes To The Rescue 1967

In early 1967 we were asked by Mathew Hall Engineering, to undertake the movement of four HA Liquor Storage , stainless steel tanks, each 40’0” long x 10’ diameter weight 12 tons each, to be transported some 691 miles to Atomic Energy Authority, Dounreay, Scotland, there to be craned into a deep concrete pit, lined and levelled, firmly anchored down before being buried in concrete.

A reasonably straight-forward task today, however, in 1967 before it could start, a suitable route had to be found for the transport and this entailed ensuring that every single bridge along the proposed route had sufficient headroom as we would be travelling at 15’2”” overall, plus, there was an overly aggressive penalty clause of £2500.00 per day. On this occasion we had time on our side to undertake the movement, the down side being that the move was to take place in January and the weather at the top of Scotland was not exactly tropical at that time of year.

Having checked the route, obtained all the required permits, the date was set and the drivers warned for a two week “away” job, our senior driver – Brian Howard – who would lead the convoy in his new British Leyland “Beaver” Unit with its semi-automatic gearbox was chomping at the bit, however, he advised Mac that there appeared to be a “growl” in the transmission, and it was agreed that the matter should be investigated before starting out on this movement. Mac duly contacted Leyland headquarters/service centre at Aldenham, Nr.Borehamwood, explained the problem and the urgency behind our request, it was agreed that the Unit should come to Aldenham immediately and they would have it rectified within 24hrs, this we duly complied, unfortunately when we returned to collect the vehicle it was obvious that it had not been touched. The management apologised but said they would try again that evening, having related the situation to Mac, he decided “if the monkeys let you down, contact the organ grinder” in this case Sir Donald Stokes, Chairman of Leyland Motor Company, to his surprise he was listed in the telephone directory and Mac duly dialled, and was surprised to be speaking with Lady Stokes who answered the phone! Lady Stokes apologised that her husband was not at home, but would be back shortly, could she assist, so the situation was related, a short while later the phone rang and it was Sir Donald Stokes, the current situation was related, explaining that we had bought the latest “Beaver” and the contractual obligation on our young company. The next phone call was from Brian who was still at Leyland HQ. Apparently the whole place had come alive, the vehicle was in the workshops lights ablaze, managers had appeared from every corner,and the word was that “He” was coming, this being Sir Donald himself, instructions had been issued get the vehicle repaired tonight, if that fails replace with a brand new unit! Brian returned the following morning to find his unit repaired and ready for the road.Brian collected his loaded trailer and in convoy with the other three trailers proceeded to Dounreay arriving safely 30hrs later. During the next two days the tanks were offloaded, lowered into the deep pit and securely fixed down, ready for others to pour concrete.

Job complete, but, if it had not been for the intervention of Sir Donald Stokes, that important project could have been jeopardised.