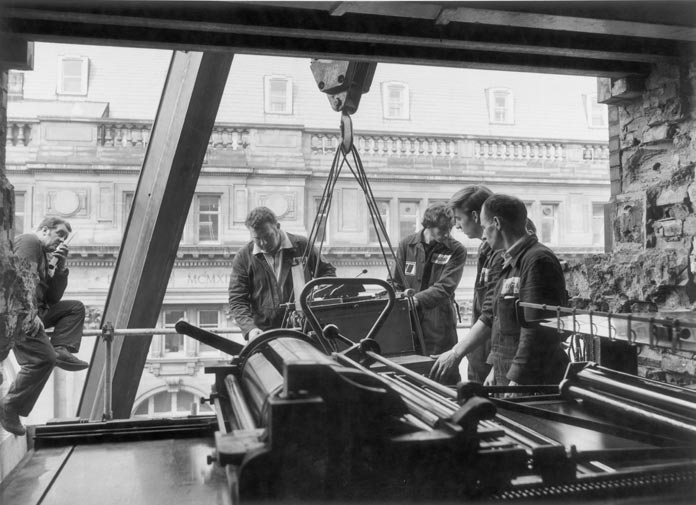 On 17th October 1969 we were delighted to receive a letter from Mr Ed Taylor, Development Controller for Manchester Guardian and Evening News, advising us that they were transferring production from Cross Street to Northcliffe House, Deansgate, Manchester, at the end of next summer and, as the letter continued,

“I understand that you have had wide experience of this type of operation and of the vital necessity of it being organised to the minutest detail, in order for our newspaper to continue in uninterrupted production””

A job right up our street, as we remarked to Ed Taylor whilst arranging a meeting to discuss his requirements. At that meeting was Bob Tanner the MD of our Vanguard Commercial Removals, his team would be responsible for all the office furniture, library indeed, everything except the machinery , that was Engineering’s province.It was the criteria of the move, that was the major headache, the entire project had to be completed over one night. ie..as soon as the presses stop running and producing the Saturday football edition and ready by 1130hrs on the Sunday morning, to start putting the Monday edition together. On the face of it, an impossible task, however, as Mac learned the existing building was going to be demolished, he persuaded Mr Taylor to offer three exit routes for the machinery, outside of which we would position a suitable scaffold platform to accept 4tons load, three cranes and vehicles, this meant the total Vanguard army increased to 100 men, 40 Engineering and 60 Commercial.

The official order was received and the weekend dawned, all crews and equipment had landed in Manchester on the Friday, they were fully briefed and despite being told to stay off the booze that night, unfortunately being extremely fit young men this was ignored and a pitch battle did ensue in the early hours with the local Teddy boys, they ended the worse for wear, the main worry was if we had lost any crew members, as this would endanger the project and Vanguard!!

We needn’t have worried, at 0700hrs the crews assembled – a bit the worse for wear but ready and willing – ate a hearty breakfast and, with their written orders, visited the site to view the move ahead so they were ready for action at 1730hrs. At the appointed hour, just as the last football editions rolled off the presses, the well honed army, swung into action, and over the next 18 hours the momentum was maintained indeed, the Linotype machines were moved so fast that the molten lead in the pots hardly had time to solidify!! Needless to say, the deadline was met, and a grateful Managing Director, Mr A.M Harvie wrote a glowing letter, the final paragraph read-
“Your planning and execution of the move to our Manchester headquarters from Cross Street to Deansgate deserves the highest commendation”