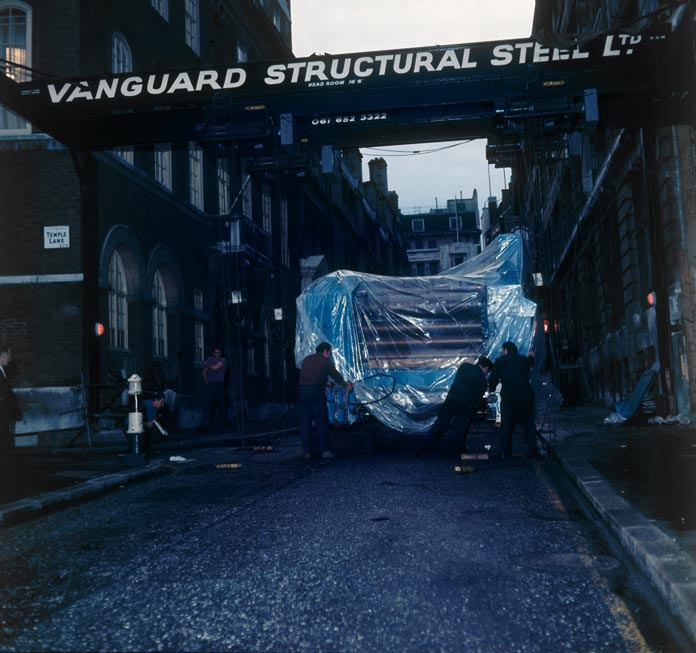 News Of The World

In 1971, The News of the World had to increase its production to meet the ever increasing demand of its readers, the circulation then was 6,128,000 on each Sunday to meet this and future demand, they placed an order with Miehle Goss Dexter of Preston, Lancashire for the latest Goss Headliner Mark ll Press which measured 48m long x 4mwide x 6.4mhigh and weighing 464 tons.Until this date, all previous Press installations had been extremely expensive and time consuming as they were normally “piece-mealed” into sections for delivery and re-assembly at final destination. This Press could deliver 220,000, 32page newspapers per hour with its 4 Folders.Once satisfied with the Press performance, the thoughts turned to the installation and N.O.W were horrified to be advised from dismantled to erection and production would be 18 months, this being compounded by the difficulty in installation within the Fleet Street area.

As Vanguard had recently completed a high speed installation of a Goss Press at Berrows Newspapers , Worcester, George Welsh M.D., suggested that his Technical Director Mr Ken Taylor contact Vanguard to see if any improvement could be achieved. A meeting was held with George Welsh, Ken Taylor and the fearsome Ken Harris, Chief Engineer at N.O.W. and they were advised that if suitable openings could be made in the facade of the building and through the ground floor and lower floor into the sub-basement, then Vanguard could install the Press in 35 continuous days, N.O.W. were thrilled at the savings in time and money, and placed the order with Vanguard.

True to their word, the various openings were constructed and Vanguard Structural Steel designed, fabricated and delivered the heavy duty gantry spanning Bouverie Street, once all test certificates and road closure notices were issued, the Vanguard crew in position, the deliveries from Goss in Preston could be made at 0500hrs every morning and Bouverie Street had to be re-opened by 0700hrs daily.
On the 35th day the final component was delivered and installed thus the world record performance ended, but it cemented Vanguard’s reputation throughout the printing industry worldwide.