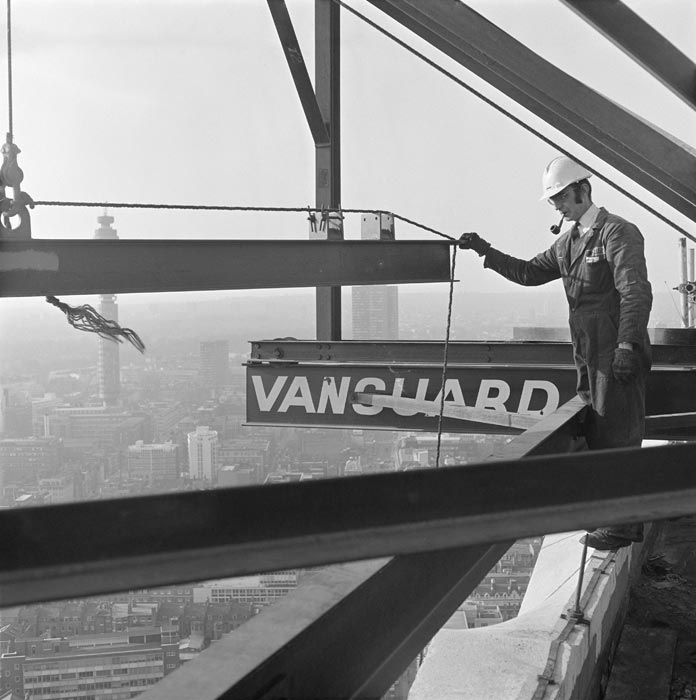 In the mid seventies, Centre Point , became the focal point of the Labour activists who wanted more housing, and, their vitriol was directed towards Harry Hyams, the architect and owner of this building, hence they had occupied some of the ground floors and had a constant demonstration around the base, indeed, one of the slogans painted on the windows at 3rd Floor level read – “We’re just wild about Harry!”

In the midst of this continuing struggle, new Air Conditioning equipment was to be installed on the roof, some 400ft above pavement level, this was too high, and therefore beyond the reach of ordinary carnage at that time and, the only helicopter that would handle these weights would have been a Chinook, unfortunately as there had been recent military, accidents involving this machine, NO commercial contracts would be undertaken. The problem was solved by the Vanguard boffins, a heavy lift gantry weighing 8 tons, together with suitable winches which could be dismantled into small sections, the heaviest being 4 cwts.

Each section was lifted to the roof using the window cleaner’s 6 cwt cradle/hoist, once all the parts were on the roof, the entire gantry was assembled, secured to the roof, in order to avoid any twisting of the loads during the upward movement, the hook beam was shackled onto each of the guide cables from the cleaners hoist the slightest deviation would have damaged the outside of the building, with horrendous repercussions. Thus the 3.5 ton Refrigeration Condensers, Evaporators and Cooling Towers were lifted to the roof level, tracked into positions to engineer’s requirements.
Once the new equipment had all been delivered, the gantry was dismantled into small sections, delivered to pavement level in the window cleaner’s hoist, loaded to our vehicles for return to depot, whilst the demonstrations continued oblivious to the operations above their heads.