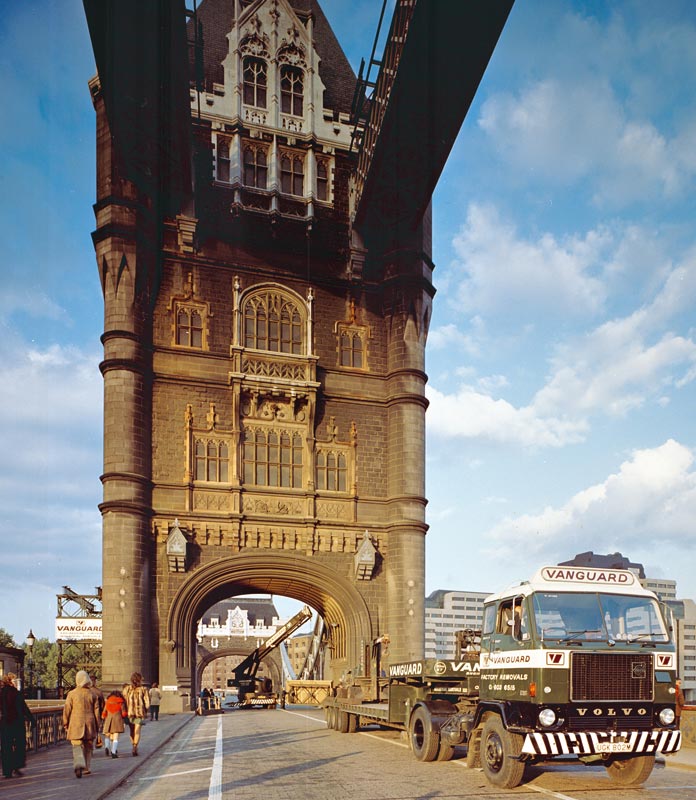 During the modernisation of Tower Bridge, Vanguard were contracted by The Cleveland Bridge & Engineering Co.Ltd., to undertake the marking-up, dismantling and subsequent removal, to our temperature controlled warehouse in Thetford, Norfolk, two of the original Hydraulic engines and associated components, total weight 700 tons.

Vanguard were also responsible for the removal of 100 tons of Accumulator from its chamber beneath river level! In order to facilitate the removal, vanguard used Thermic Lances to slice through the 3 inch thick , cast iron walls of the huge Accumulators and to reduce the 12 ton cast-iron Ram sections into suitable sizes in order to be removed via a small aperture at pavement level, and subsequent disposal. The Thermic Lances operate at a temperature between 3 – 4000 degrees Centigrade, truly the proverbial hot knife through butter!

The Bridge opened in 1894, and in those Victorian times, the stairs in each Tower were heated by gas, in order to ensure that the bridge hydraulics did not freeze, this afforded courting couples during the winter months, a suitable venue for a bit of “hanky – panky”! Unfortunately the stairs also gave free access to the Upper Walkway, affording those of a depressed nature to visit, for a final view, before meeting their maker!!

Parliament was somewhat shocked by these events and finally, in 1910 announced that the British public couldn’t be trusted they were conceiving and killing themselves and the stairs and walkways would have to close, they remained shut, finally re-opening in 1982, to the public with adequate safety precautions.