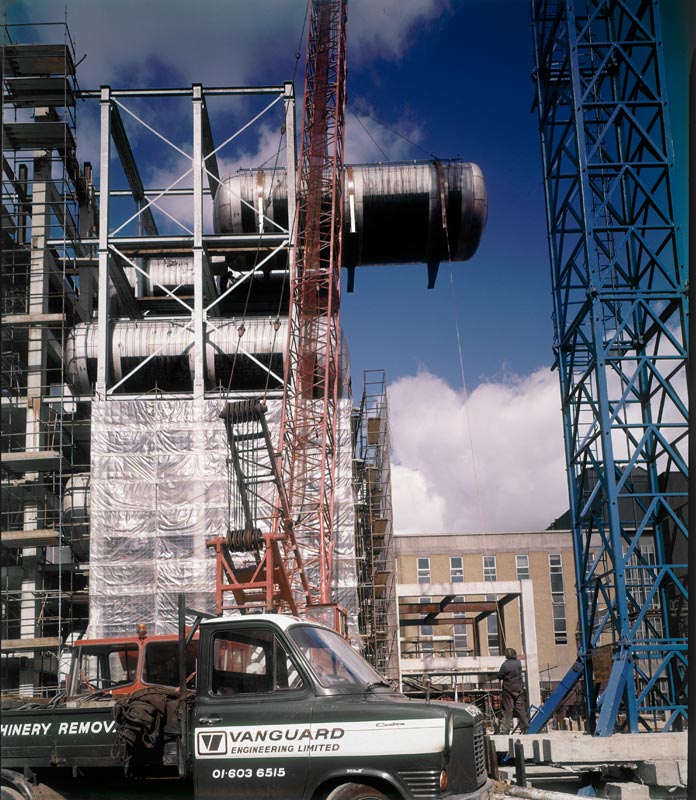 Gordon Smith and Partners contacted Vanguard in the mid 70’s to say that they had a project at Truman Brewery, Brick Lane, London E1 that they felt would be right up Vanguard’s street as we had skilled riggers with a head for heights and precision cranage, the job was to transport and install 8 x 800barrel (each 230,400pints) lager storage tanks each 41ft. long x 13ft.6inches diameter and Weigh 8 tons, to be lifted into open steelwork where the top tank would be 70ft.above ground level.

We submitted our quotation which was accepted; we then applied for the necessary wide load permits to undertake the transportation of the eight vessels, over two successive weekends, from manufacturer in Rochester – Kent to Brick Lane. We utilised a 110 ton capacity Lorraine lattice jib crane as this machine had a very precise slew and lift control, exactly what this job required. Each vessel was lifted to the correct level and “floated” into the steelwork to allow the leading end to be lowered and rested onto machinery skates and the tank attached to a winch, as the tank was simultaneously lowered and it was then drawn into the building until the slings on the trailing end of the tank rested against the building steelwork, the vessel was then lowered onto a further two skates, the slings were then removed and the vessel further drawn into the building, that movement on top of the 10‘’ wide steelwork had to be very carefully and slowly managed. At any one time one of the skates could float when the weight of the tank shifted to the three other skates. That 100 cwt skate could easily fall off the steelwork and seriously damage the tanks at lower level, worse still if the weight transferred back to a level situation the position of the missing skate would precipitate a catastrophe; the vessel would follow the skate causing huge damage to the vessel itself, those at lower level and our company’s reputation. The crew on this project were real professionals and always had 4’’ of timber packing following skates so if any skate left the steelwork the timber packing would take over.

The installation of all eight vessels was successfully achieved without any drama. Such an operation could not be undertaken today, where every piece of safety equipment including safety nets, scaffolding, and arrester harnesses would have to be in place.