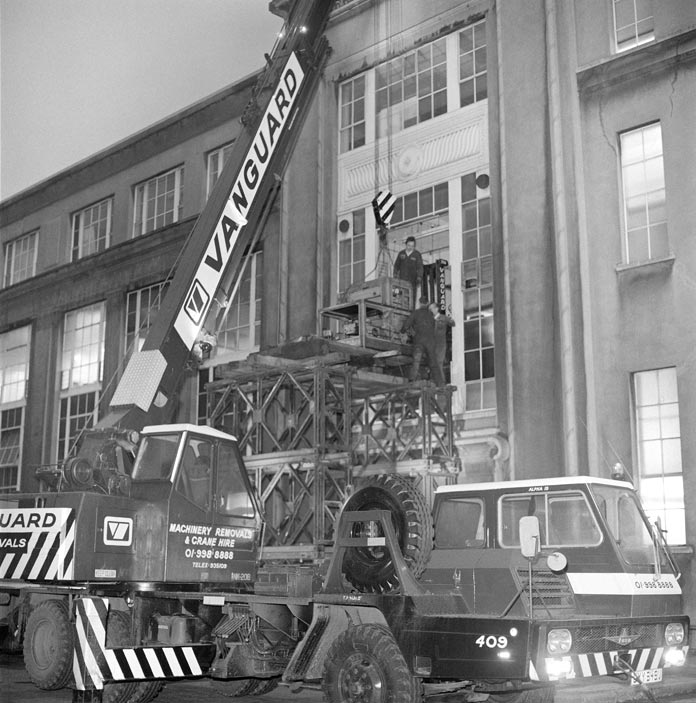 In 1977 Vanguard were contacted by F.B.Machinery an agent handling machinery sales both in the UK and overseas, to submit quotations for the removal of the contents of the former Reveille buildings in Stamford Street, London SE1, owned at that time by Mirror Group Newspapers, this consisting of three newspaper press lines – 2 x Hoe and 1 x Goss – together with all ancillary production equipment. The equipment was to be marked-up both mechanically and electrically, dismantled and, packed into export cases for onward movement to India.

Vanguard submitted the quotations to meet the client’s requirements and started work in Stamford Street, unaware of the background to the eventual purchaser. It appears that our client –F.B.Machinery – had approached Mirror Group Newspapers on behalf of an Indian client who wished to start production of a newspaper in India and sought to purchase the redundant equipment in Stamford Street. Mr Percy Roberts , Chairman of the Group and his Lieutenants responded sympathetically to the approach, the equipment was indeed surplus and, despite being an insurance value of £8 million a figure was agreed, and paid in the sum of £250,000.00. Vanguard subsequently received instructions to deliver the first Hoe Press to an address in Glasgow, for storage, again we received instructions from our client to undertake the mechanical and electrical assembly of the Press in the building, which we undertook, until the fateful day that a curious engineer from the Daily Record, happened to pass the building, saw the Press, recognised the colour as being Mirror Group, rushed back and advised his engineering superiors, they had a look, rang London and then, all hell broke loose!!!!

Court Injunctions were obtained, the site in London closed immediately, the doors to the building were welded shut, as it dawned on Mirror Group executives that they had been duped, by their arch rival Mr Murdoch….aka the Sun!!!

Once the dust settled and the two main protagonists reached an amicable agreement, we were allowed back onto the site in London to completed the removal of the remaining Press and components, Mirror Group personnel are still trying to trace the Indian gentleman who arrived at their offices, waiving a cheque book in the first place!!