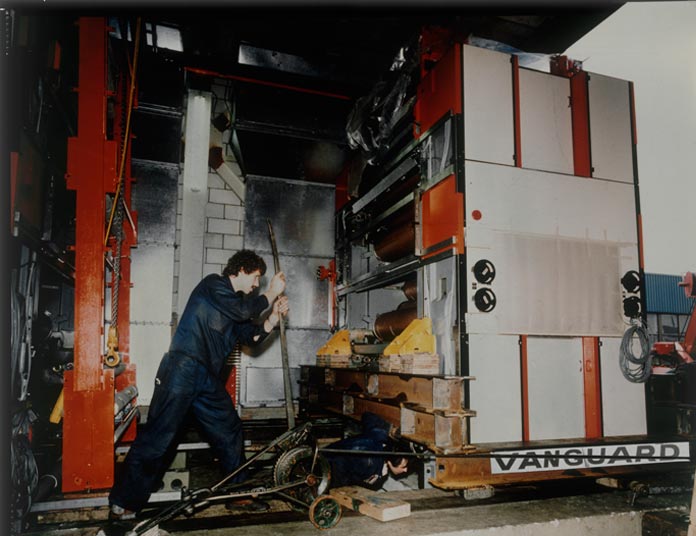 A second Wifag OF-7 Web Offset, six Unit , two Folder, eight Reelstand Press, valued in excess of £7million and with each unit weighing an impressive 45tons, has just been installed in Rotterdam, Holland for Nederlandse Dagbladunie NV., by vanguard Engineering, the Number One throughout the UK and Europe for newspaper press installation technology.

One of Vanguard’s invisible exports this year, this major installation represents a “second time around” for Vanguard, who undertook a similar contract for the Dutch publishers in 1980, and the professionalism and speed with which the project was handled then, was directly responsible for the repeat order.

Following the successful completion of the latest operation, Andre M Nuijten, Technical Director of Nederlandse Dagbladunie, had no hesitation in expressing his great admiration for the way the Vanguard team tackled the very tricky operation, in an extremely difficult location. “It was”, he said,” a delicate operation of many risks, you sent a great team, which could go all over the world as proud representative of Vanguard and Great Britain”

Andre M Nuijten was a very special man, when Germany invaded Holland; he escaped to England, joined the RAF and became a Spitfire pilot throughout the Battle of Britain. When Germany got its comeuppance he returned to Holland studies mechanical engineering worked in the newspaper industry and became one of the foremost print engineers in Holland. Throughout the newspaper world he was well liked, respected and just a super guy, who unfortunately died a few years ago.