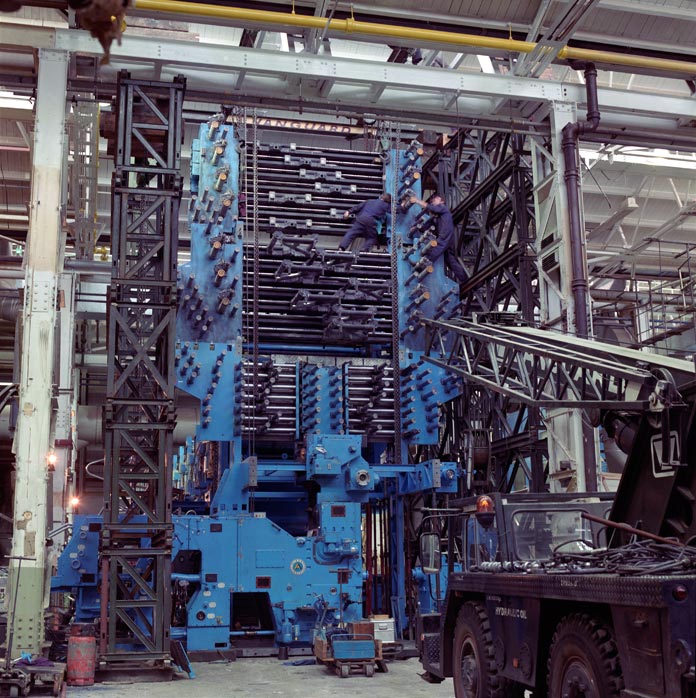 At the beginning of the 1980’s, Vanguard had installed the Albert TR5S, 13 Unit Gravure Press at the Odhams works on the north side of Watford, now, the rationalisation of the Sun/Odhams activities, everything hinged on the movement of this leviathan press, in the shortest possible time, as the product revenue from this machine was running at £100,000.00 per week!

As Vanguard had installed the machine only two years prior, they were the obvious choice, however, they had to win the tender, luckily they did and the big question was, could they match the Sun time frame of 6 weeks?

The crews and equipment worked day and night shifts, the critical point in the whole Press was the 75 ton Folder , towering some 10 metres above ground level, the 10 ton top section protruded through the ceiling of the Press Hall, this was overcome in usual Vanguard fashion by erecting a heavy gantry at roof level, lifting the top section and storing, temporarily on the roof, thus allowing the remaining lower sections to be dismantled.

The entire Press was conveyed through to the Whippendell Road premises, and ingressed via a hole in the Bindery Room wall, such was the faith in the Vanguard expertise, that this area did not stop during the ingress operations. Once again, the Folder was the lynch-pin of the operation, when the 10 ton Top section was shoe-horned into position there was only ¼” to spare before hitting the immoveable roof!!Such was the impression made by this move, that Mr Robert Maxwell made time to visit site and congratulate the Vanguard team.