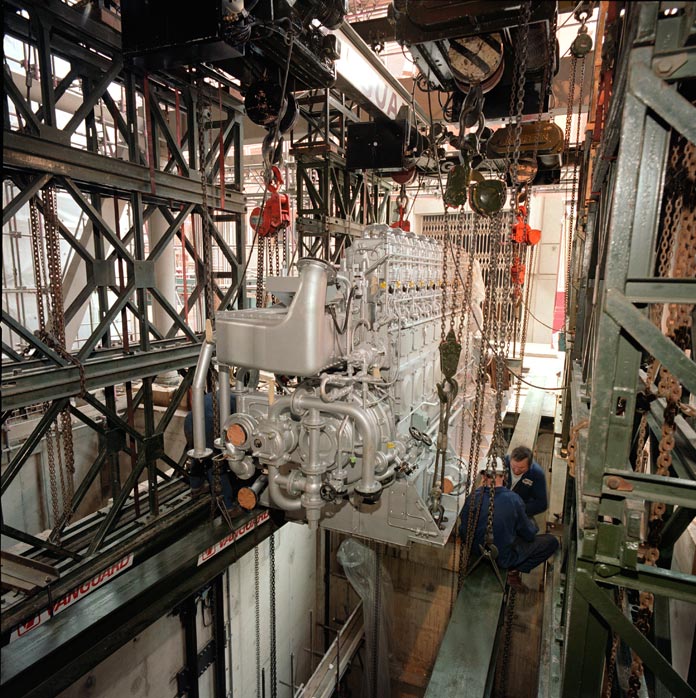 Lloyds Of London – Vanguard To The Rescue

The building of Lloyds of London was proceeding apace with a finish date , set in stone, when disaster struck, the huge plant room, some 60 feet below ground level was accessed by a 40 ton capacity hoist, which had to be tested with 52 tons of test weight, before being issued a Test Certificate. On the day in question, a vehicle laden with the test weights arrived and promptly started to reverse onto the platform, the hoist started to sink, so the hydraulic pressure was increased and the driver instructed to continue his reversing – instinct was with the driver as he kept his cab door open – with the trailer on the hoist the entire platform sank, he lept out just as the weights, hoist and trailer plummeted to the bottom of the shaft destroying the hoist and mechanism!

The manufacturers were contacted and asked to repair the hoist, their polite reply was, that the whole hoist would have to be redesigned and that would take months, at that, the proverbial hit the fan!! The original contractor – Pickfords – who were to install the Plant Room equipment, merely shrugged their shoulders and said nothing could be done until a new hoist was in situ. One of the Bovis engineers knew of Vanguard, he telephoned, and our senior contracts manager attended site on the Saturday morning, discussed the problem and, by lunchtime had solved the headache, forget the hoist, we will utilise our own bailey Bridge gantry and electric/manual hoists, completing the operation within two weeks. The sighs of relief could have been heard by Dick Whittington on Highgate Hill!

As soon as the damaged hoist and the pig iron had been removed from the shaft, the Vanguard team arrived on site and erected the Bailey Bridge gantry, and electric/manual hoists, over the shaft with two horizontal beams “floating” as a trapdoor system. The entire equipment was duly delivered over a two week period, lowered into the basement for the various contractors to “hook up” and the completion date was still on target. The smile on the engineer’s face would have been approved of, by Dick’s cat!