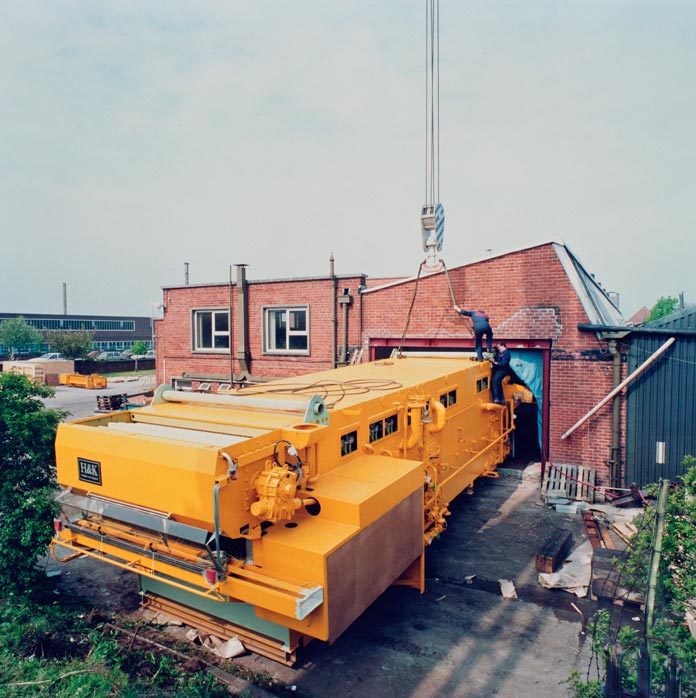 Cantrell and Cochrane, Ireland’s leading soft drinks manufacturer, contracted Vanguard to undertake the movement of a new Bottle washer from Holstein and Kappert Gmbh, Dortmund, Germany to deliver to their works in Belfast. This was no ordinary Washer, it measured 13.50 x 4.90 x 3.10metres High and weighed 40 tons, having completed a route and site survey, we obtained all the necessary German, Dutch and British movement permits and duly despatched our heavy duty semi low loader to collect the Washer from Dortmund on the agreed collection date. Once loaded, with all the required escort vehicles and police we set off, towards Essen and ultimately Zeebrugge, all according to plan, unfortunately the British Seaman’s strike was about to throw a huge spanner in our plans!!

The strike had shutdown Zeebrugge, the drivers were contacted and told to stop immediately as Paul Bradford, Vanguard’s transport manager, sought a resolution that would keep the show on the road. A sailing was found from Duisburg to Boston, Lincolnshire that could accommodate the cargo but it was sailing that night! After various discussions with German authorities, who were extremely sympathetic to our situation it was agreed to amend the permits, with immediate effect and the load was back on the move. The vessel called at Rotterdam and finally arrived in Boston some 48 hours later, thankfully the port was strike free and, upon completion of UK Customs we were on the move, the question was….which way?

All the west coast ports were strike bound, whilst we kept the vehicles on the move towards a central point in UK, the phones were red hot seeking an alternative, finally Eureka!! A Danish coaster had been located and contracted to load in Workington, the transport was duly routed North and West, at the same time we had contracted a 200ton crane to make a similar journey from Stoke on Trent to meet the vehicle and load the precious cargo onto the vessel, so far so good, would our luck hold??

Having transferred the cargo onto the “Jenclipper” and departed for Warrenpoint a small port at the west end of Carlingford Lough to arrive on the Saturday morning, unfortunately, the Warrenpoint Harbour Master telephoned to say that militant pickets had arrived in the Port, however, as luck would have it, they were concentrating on British vessels and as such ignored our Dutch vessel, within 3 hours of arrival we had discharged the cargo and loaded to our heavy trailers ready for the final leg of the journey, which at 4.90 metres in width would not be without its own problems as the Police would not escort through “bandit” territory, we were on our own!

However, by mid afternoon the valuable cargo arrived at site where our crew and equipment immediately discharged the Washer, lined it up the temporary access doorway, and, after all the problems the Washer slipped through the entrance like a knife through butter, to everyone’s relief. Yet another job completed by Vanguard, justifying the statement “Nils Desperandum”