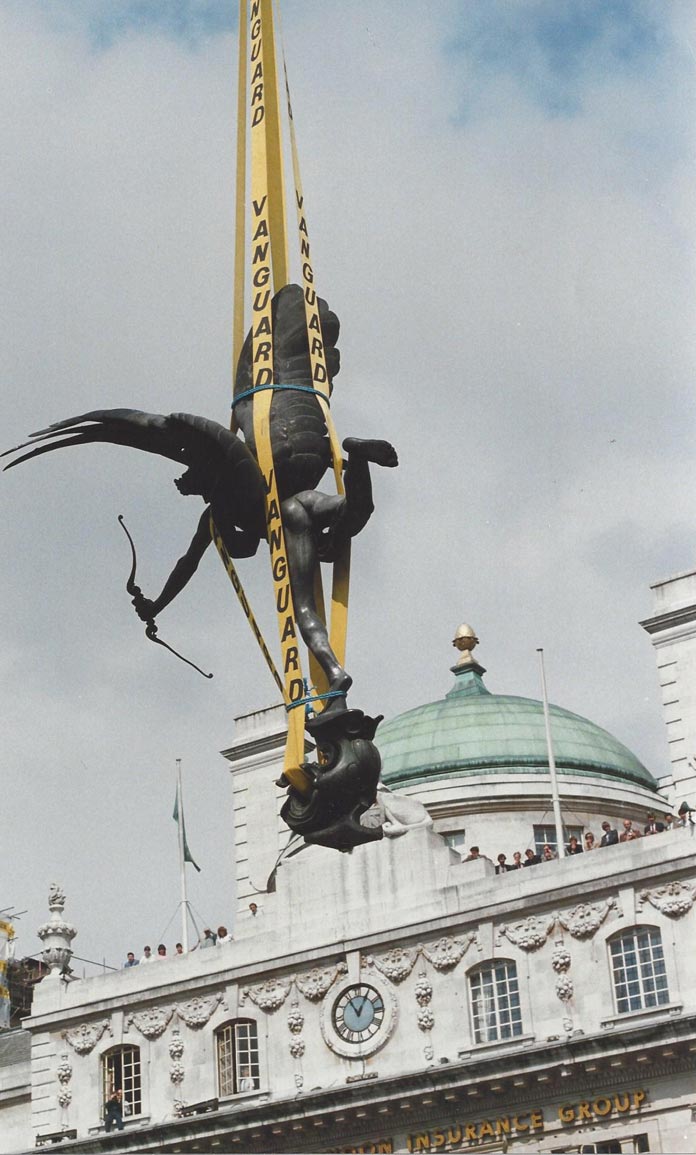 In the mid 80’s a new development was planned around Piccadilly Circus, in order to make it more pedestrian friendly and, at the same time ease the flow of traffic around this historic monument, as part of this operation it was agreed that the famous Eros should be inspected and the base, including the Shaftesbury memorial fountains overhauled, as they had been in this position for almost 90 years.

The work was to be undertaken under the guidance of English Heritage and in particular the restoration works on Eros and the base would be undertaken by Charles Henshaw & Sons, Edinburgh who had the expertise and heritage to undertake such a delicate task, indeed, they had persuaded Mr George Mancini out of retirement, to handle such a prestigious project, Mr. Mancini, only a sprightly ten years younger than Eros, had impeccable credentials indeed, he had actually worked with Eros’s sculptor – Alfred Gilbert – such a teacher second to none.

The delicate operation and precision required was handed to Vanguard, as their expertise in handling delicate and irreplaceable historic objects had been acknowledged, indeed Trafalgar Square witnessed such operations each year when the Christmas Tree is installed. Vanguard arranged for Eros and the pedestal, in its sections to be lifted and placed into their own crates, loaded to our vehicles and delivered to Edinburgh, amidst tight security, for the restoration work to be undertaken , which would take almost two years.

Flash forward some 18 months and Eros was back, safely in our Greenford depot, in the meantime our crews and equipment had delivered and positioned the base sections and the pedestal,within this operation our electrical division had undertaken the installation of a control cabinet within the base, thus incorporating controls for the fountain and lights for the statue, thus the fountain would be operational for the first time in many a long year.

The unveiling ceremony was to be performed by the then leader of GLC, Ken Livingston, this was also beset with it’s own problems, the weather which blew up a storm and, in the process destroyed the special unveiling tent, but, again Vanguard had covered Eros with dust sheets and tape, when the time arrived to unveil, despite the winds, our crew delicately unwrapped Eros and, once again , London had it’s heart back in place!!