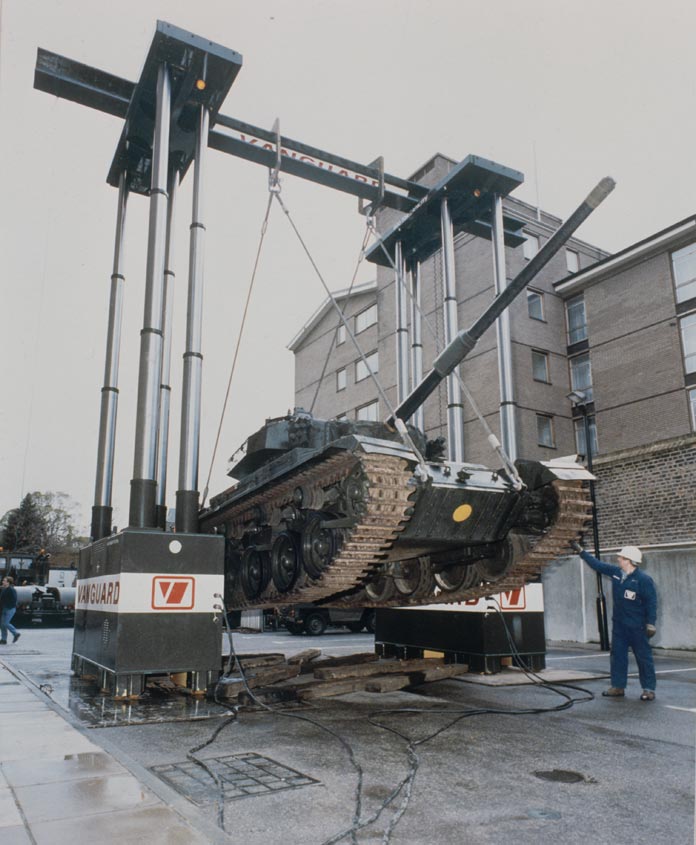 The Army’s tank transporters are prohibited from operating in London due to the capital’s axle loading restrictions, so Vanguard were given the opportunity to undertake the loading and transportation of a Centurion Tank from the National Army Museum in Chelsea to the Museum of Army Transport in Beverley, Humberside, utilising one of our five- axle heavy duty semi- low loaders. The problem of loading the tank onto the trailer still remained but Vanguard solved that problem by bringing in their 600 ton hydraulic gantry, the proverbial “sledge hammer to crack a nut”!!

The 50 ton Centurion tank was easily hoisted into the air and the Vanguard trailer reversed underneath. This action was all undertaken in the teeth of a fierce gale, which actually rocked the tank in its slings, the Centurion was lowered onto the trailer, thoroughly secured ready for the journey to Humberside and safe delivery.

Mac McCullagh, the Chairman of the Vanguard Group, was particularly interested in this project as, on 19th March 1959 he received his enlistment notice for National Service and instructed to join the 5th Royal Tank Regiment at Catterick Camp, Yorkshire. After 6 months square bashing and tank training, he was posted to Fallingbostal, Germany and given command of three Centurion Tanks, subsequently a heavy gun troop of three Conqueror tanks, finally Recce Troop. He spent a thoroughly enjoyable time in Germany, made many long lasting friends and, would be the first to admit, National Service did him a power of good.