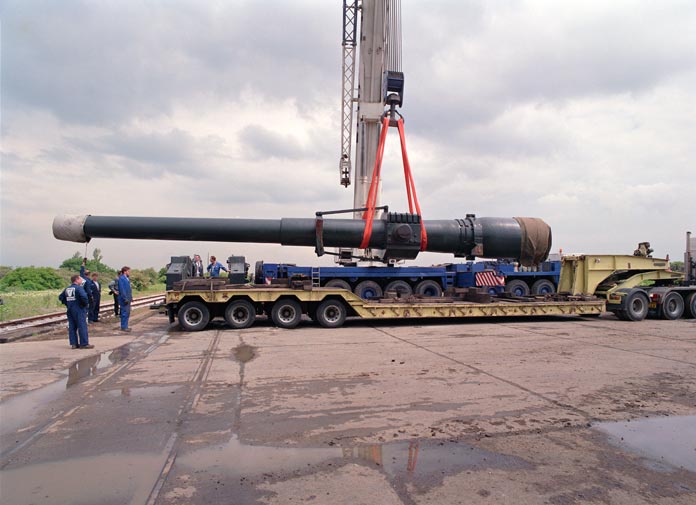 Vanguard temporarily turned their attention away from the normal, industrial movements, to complete a two day operation to relocate Britain’s biggest gun – an eighteen inch railway Gun from the Ministry of Defence, Proof and Experimental Establishment at Shoeburyness, Essex to the Royal Artillery Museum at Woolwich.

This is no ordinary gun, it weighs over two hundred tons!! Vanguard used a 250 ton capacity crane at Shoeburyness to lift the Barrel out of the Railway Mounting and it weighed in at one hundred and twenty tons, the Mounting weighed at a mere ninety five tons. The two separate components were loaded onto our multi-axle semi low loading trailers and with the assistance of Essex and Metropolitan Police as escorts, we navigated the route via the Dartford Tunnel –this had to be closed whilst our convoy passed through – and finally reached the site at Woolwich.

At Woolwich, we had erected our 600 ton capacity mobile Hydraulic Gantry over a short stretch of railway track especially constructed by the Royal Engineers, we offloaded and landed the Mounting then the Barrel followed, but this was left suspended overnight to await the formal ceremonial acceptance the following morning, but the main works were completed by midnight on Day 1. The following morning the ceremonial handover was completed, by the lowering of the Barrel into the Mounting, in the presence of Colonel ‘Monty’ Cleeve, then aged 97. He was the Commanding Officer of the Royal Artillery’s Railway Super Heavy Guns that were used to defend Britain’s coasts in 1940 and his personal connection with ‘Bochebuster’, one of the sisters of this gun, qualified him Guest of Honour at the presentation.

On a short note, the shell fired by this gun weighed 2500lbs with a maximum range of 14.3miles, a very big bang!!