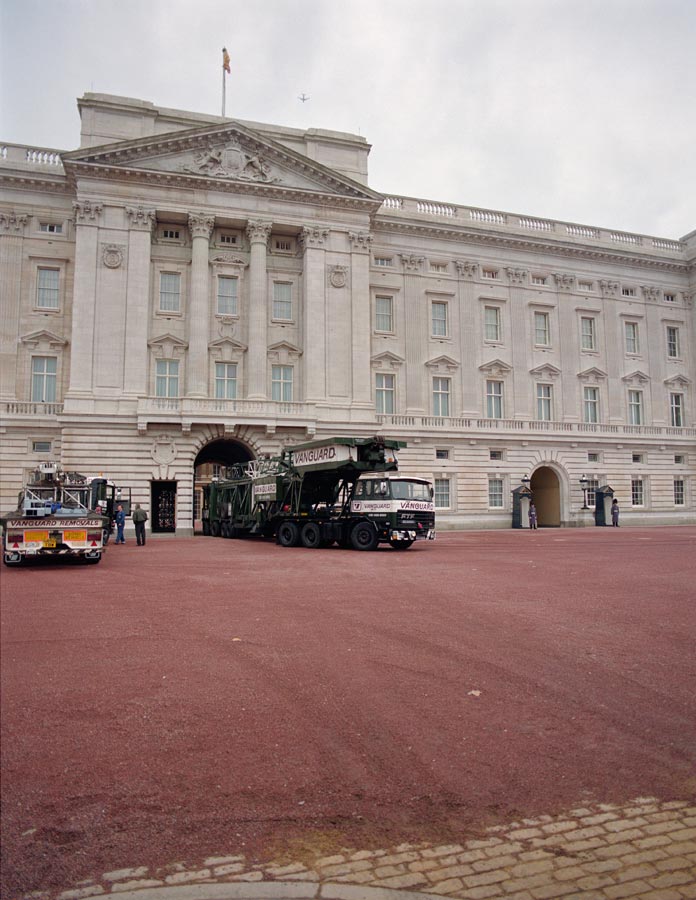 By Appointment, At Buckingham Palace

We were contacted by APV Baker Limited to submit quotation for the changeover of Air Conditioning Equipment on the south- west wing of Buckingham Palace, after completing a survey of the site, the choice was either, close Palace Road and Buckingham Gate in order to stand a crane or, if we can access the inner courtyard with our GCI crane then the whole operation could be completed without such major disruption, there was, really, no discussion! The only proviso being, that the operation has to take place when Her Majesty is not in residence.

On the chosen Monday – Her Majesty supposedly at Sandringham — crew crane and equipment arrived at Buckingham Palace only to be met by the Royal Standard fluttering above the palace, meaning Her Majesty was in residence! After hurried discussions with senior staff it was agreed that the operation could proceed, as long as our work was kept quiet, almost impossible, so, Vanguard’s Foreman Roy Culverwell Snr, the driver Roy Culverwell Jnr.,and Mark Peters the crane operator, slowly manoeuvred the GCI through the arch into the inner courtyard and assembled to its full height of 100m and radius of 55m and removed the old unit, ready for scrap.

Shortly after starting work, a member of the Palace staff arrived, explained that the Queen and Duke of Edinburgh were watching from one of the windows and wanted to know exactly what the operation entailed, this was duly imparted and the details passed “upstairs”. Every hour, through until we completed the works and installed the new units, the same member of staff requested an update on the operation and duly departed, with the info, the job was completed by 1700hrs as predicted, and we duly departed, a real command performance!