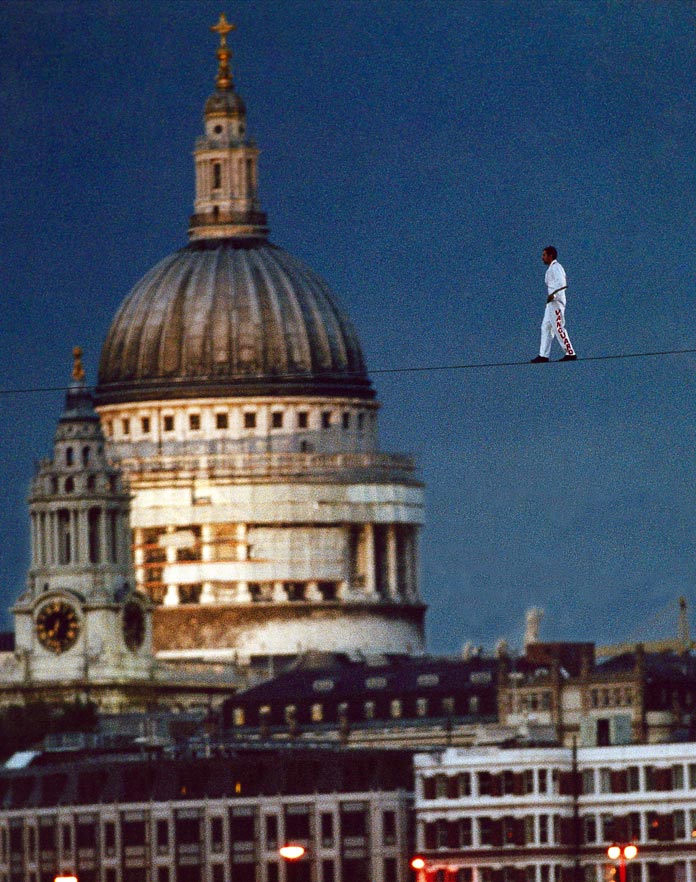 Prior to a Mega-Bash planned to celebrate the New Millennium, another celebration was planned on and around London’s River, namely the Thames Festival, as a curtain raiser, a crossing of the Thames was proposed by Didier Pasquette and Jade Kinder-Martin, 150 feet above The Thames! Having assessed the professionalism and capabilities of this daring duo, during practice in France, the show was on the road, Vanguard liaised closely with City of London, City of Westminster and London Boroughs of Southwark and Lambeth who were all keen to re-kindle interest in the River Thames, once the busiest river and port in the world, its traffic is now insignificant all it does is go in and out every 12 hours!

Once all the calculations had been made, permissions granted and Risk Assessments approved, very early on a Sunday morning, the 18mm wire rope was towed across the river, manhandled across several anchored barges and pleasure boats, winched over the top of RQMS Wellington and finally secured to two 120 tonne capacity cranes, one on either bank. Once secured, the two cranes lifted the rope to 150 feet clear of the water and Vanguard’s crews applied the final tension with tirfors. The final task before the record braking attempt was to attach numerous cross ties, known as cavalities to the rope for horizontal stability. A Special Forces Canoe gave magnificent support taking each cavality to its anchor point.

By that evening, and with only minutes to spare everything was ready and at 7.00 pm watched by forty thousand spectators, British and French TV Stations, the two men set off, fifteen minutes later they met in the middle, Didier Dropped to one knee allowing Jade to step over and both continued on their way to opposite banks completing the crossing safely in just over half an hour, to thunderous applause and a fireworks display. This had been a high risk but extremely successful event as it had been in 1972 when Vanguard had positioned 35mm diameter rope between Bear Wharf and Bull Wharf, 100 metres upstream of Southwark Bridge to afford Franz Burbach, a famous German Spiderman and Newscaster, to undertake the first such crossing of the Thames.