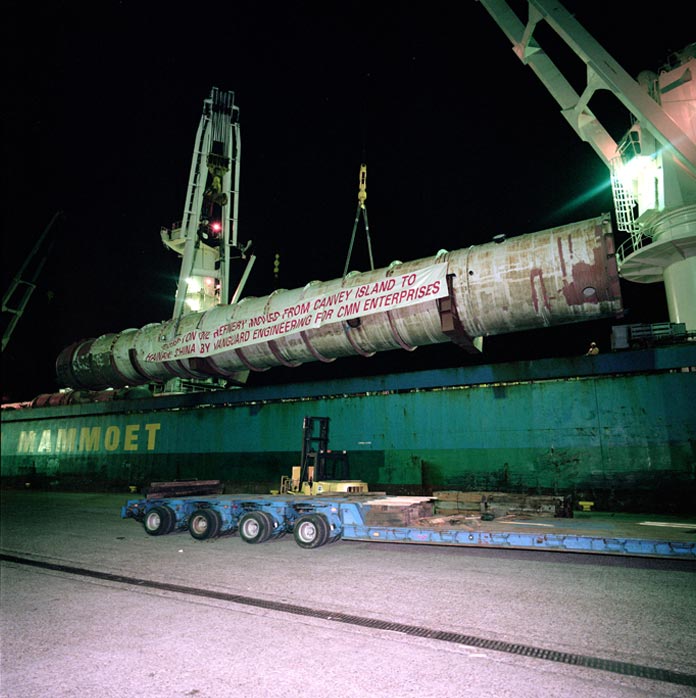 In the early seventies a 250 acre site on Canvey island was purchased by Occidental Oil to develop as an oil refinery and, to this end, 10000 tons of equipment was delivered to the site, pre-positioned on the ground, ready for assembly. Indeed the giant storage tanks were the first to be erected, unfortunately, due to successive fuel crises in that volatile period, the entire plant was mothballed.

Flash forward some 25years and the equipment was purchased by CMN Enterprises of China and, they were given just one month to remove all the equipment, or, all would revert to the ownership of the vendor. Vanguard was contacted, quotations submitted and, within hours of the acceptance of those quotations, our crews and equipment rolled onto the site, the first trailers loaded and en route to Tilbury shortly thereafter.

In one hectic month, Vanguard crews had recovered all the equipment from beneath brambles, bog and other 25 year growth and transported to Berth 34 , Tilbury Dock where we had erected a 1 acre temporary building, during the next 12 months the delicate equipment was checked, subsequently loaded with the main components and shipped to the island of Hainan in the South China Sea, there we supervised the offloading and delivery to refinery site.