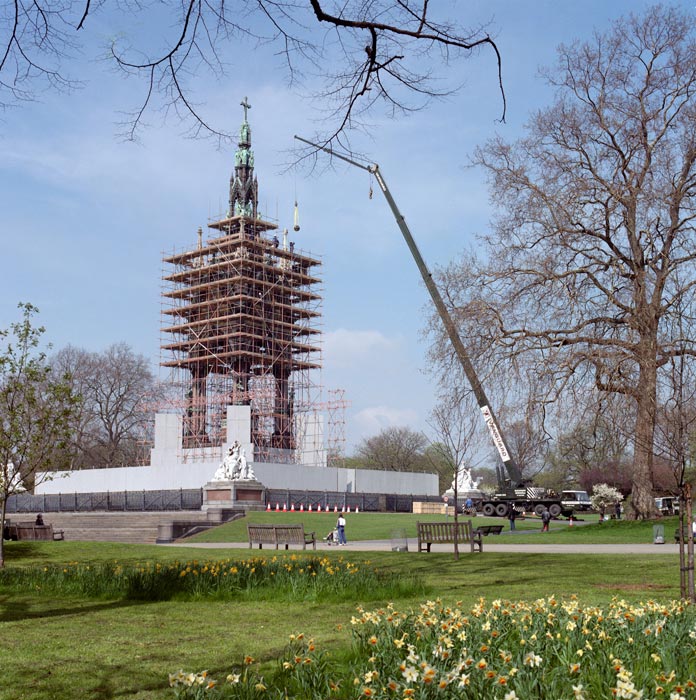 Queen Victoria’s memorial to her husband, Albert, the Prince Consort, was completed over 100 years ago, and the passage of time, two World Wars and pollution generated by the world’s largest city had not been kind to such a unique monument.

A major restoration project was underway and, as part of the project, being the removal of the four Finials atop the structure each being as ornate, as they had become dangerous! Their cast iron internal framework supported a shell of beautifully sculptured lead which in turn was encrusted with coloured glass decorations. In 1868, each Finial had been hoisted 110 ft to roof level, gently lowered onto a four foot wrought iron spike and bedded down into molten lead.

Their exposed position had left them open to the elements, and had therefore rendered them unsafe and it was vital that they were removed as soon as possible.Vanguard carefully calculated the stresses that would be exerted on each and submitted a plan. Once agreed, one of our 50 ton capacity cranes, not for its lifting capability more for its reach ability, was positioned almost 100feet away from the base, due to the labyrinth of vaults beneath the monument, the crane weighs in at almost 40 tons deadweight.

By utilisation of special cradle slings, penetrating oil, vibrating device and a tension meter, the operation started on the first Finial, when the vertical tension reached 1700kilos, everyone held their breath as there was a danger of crushing the Finial, ripping the roof or toppling the crane!! Happily with the addition of more penetrating oil and vibration, the bond broke and the Finial was safely lowered to the ground and packed into it’s individual crate, for onward movement to store.

The remaining Finials were treated in the same manner, much to everyone’s relief!

To read the full story on this and other fascinating projects, please register your interest in our book which will be available before our 50th Anniversary on the 4th August 2014.