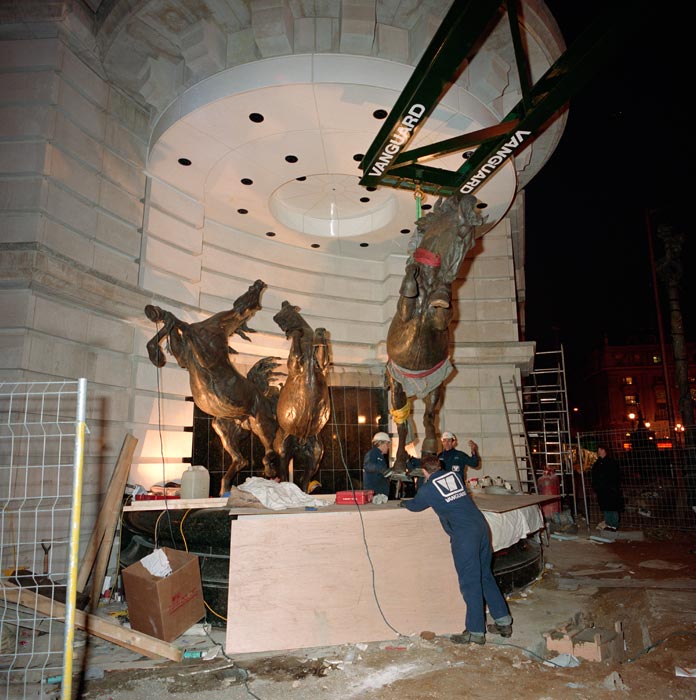 In the early 90’s, Vanguard undertook the installation of a landmark sculpture in London’s West End, “The Horses of Helios”, are four, one-and-a- half times life size bronze horses, and they currently stand at the corner of Haymarket and Piccadilly. The position posed particular difficulties for Vanguard as the site was beneath a canopy, and their height left very little room for lifting equipment. Indeed, no crane could operate in these restrictions, nor was there room for a gantry, notwithstanding the pavement loading restrictions.

Vanguard decided their 50-ton capacity Boom truck would be the ideal tool and, with a specially designed and constructed boom extension long enough to lift the sculptures over the pavement, yet slender enough to fit the available headroom. As the Boom truck would occupy the whole road during the operation, permission was sought from City of Westminster and London Buses for a road closure, this was granted, BUT it was restricted to a mere 5 hours, from 0400hrs on a Sunday morning!!!

Having calculated the centres of gravity and the final installation method, the sculptures were collected from sculptor Rudy Weller’s studio and taken to our Greenford depot, at 0300hrs on the agreed Sunday, together with crane and Boom Truck, the convoy headed to the coned off section of Piccadilly. The Horses, a pair at 4 tons and two singles, were unloaded by crane and transferred to the modified Boom truck extension, lifted into the alcove with just 50mm to spare, lined up with the bolt holes and fixed. The entire operation being completed by 0900hrs, Piccadilly Being re-opened and the new addition being much admired. The sculptor, Rudy Weller’s commission, also included the, Daughters of Helios, “the Three Graces”, which were installed by Vanguard on the 6th storey of the building, directly above the horses.